The number of Lancaster County residents taken seriously ill or dying from COVID-19 dropped to new lows in July.

• Four county residents died during the first four weeks of the month, less than half the nine who died in June, and a tiny fraction of the 209 who died here in the peak month of December.

• An average of seven people were hospitalized daily with the virus, down from 12 in June and nothing like the 152 people who, on average, filled county hospitals each day of December.

• About 15 county residents tested positive daily in July, slightly higher than the 12 in June but again a small portion of the average 365 new cases that were registered daily in December. 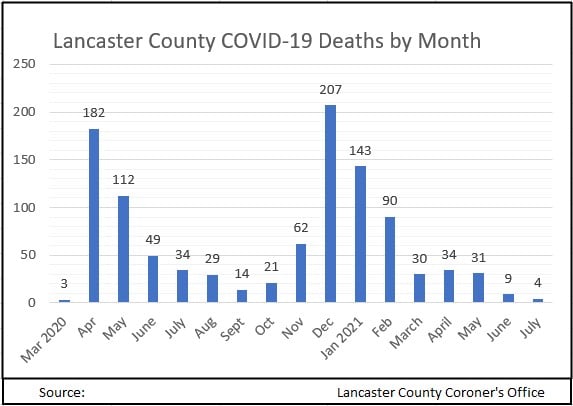 Pandemics rise and fall in waves, and there can be little doubt that the COVID-19 pandemic hit the bottom of a trough in the first three weeks of July. Since then, there has been an uptick in new infections and hospital admissions. But the increases are too small and the time period too short to say definitively that a new surge is emerging here or to know if that surge will have the severity of those in the past.

The high rate of vaccination here, especially among the elderly, most likely accounts for the plunge in COVID deaths.

In the early months of the pandemic, those over age 65 accounted for most deaths. Now about 80% of those residents are fully vaccinated. 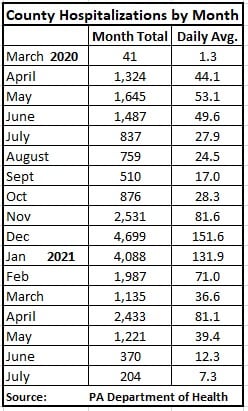 Still, the deaths that have occurred in July were older persons – two in the 50s, one in the 70s and one in the 80s. Three of the victims lived in the Ephrata-Cocalico area, one in the Strasburg area.

As throughout the pandemic, it is important to note, no children or teenagers have died from COVID-19. Only one person under 30 – a 25-year-old man with severe physical disabilities – has succumbed to the virus.

The county’s 55 personal care homes reported only one new resident case, one staff case and no deaths in July, according to the state Human Services Department.

In the county’s 31 nursing homes, there were no resident cases or deaths and only five staff cases through the first three weeks of the month, according to the Centers for Medicare and Medicaid Services. That information could not be confirmed or updated by the state Health Department. Its data this week were incomplete and flawed.

Finally, although much recent media attention has focused on two issues – the fast-spreading Delta variant and hospital rates among the unvaccinated – neither the Health Department nor Penn Medicine Lancaster General Health, the county’s dominant hospital, have reported the number of such cases in this county.

The only available information on these trends comes from the Health Department in the form of statewide averages.

Two weeks ago, Mark O’Neill, a health department spokesman, told WHYY public radio in Philadelphia that about 5% of Pennsylvania cases resulted from the fast-spreading Delta variant. And earlier this week, acting Health Secretary Alison Beam said 97% of those hospitalized statewide were unvaccinated.

Infection rates and hospitalizations vary widely among counties, however, and those numbers may not accurately reflect what is occurring in Lancaster County.

A month ago, our research group saw little need to continue reporting on the pandemic because cases, hospitalizations and deaths were low. But a number of readers asked us to continue, and so we have.

As in the past, we obtain our death reports from the office of Lancaster County Coroner Stephen Diamantoni. The number of positive tests (new cases) comes from the state Health Department.

In a significant change, we now obtain our hospital data from the Health Department. Previously, we found daily reports from Penn Medicine Lancaster General Health and WellSpan Health Ephrata to be the most consistent and accurate. LGH, however, has stopped reporting cases, and Ephrata does not have a sufficient number to serve as an index of the pandemic here.

The Health Department does report hospital cases from all county hospitals; however, it does not have a record of reliability in reporting pandemic data. Its new case data and nursing home data frequently contain questionable numbers.