The winter wave of COVID-19 weakened its impact on Lancaster County in January.

Both deaths and hospitalizations – the two most significant measures of the pandemic – fell in the first month of the year.

Even new cases, the less significant but more dramatic measure beloved by media, fell about 15% from around 11,300 in December to 9,500 in January.

While COVID-related illness and deaths decreased, avoiding the post-holiday spike that many feared, the pandemic’s toll here in January still was severe.

Its 139 deaths were more than double the 62 deaths in November and 10 times higher than the 13 deaths in September.

Similarly, the average daily number of hospitalized COVID-19 patients, at 115, was nearly 50% above November’s average and nearly four times the 30-patient-a-day monthly average through the summer months.

For the record, there was little change in the age and race of virus victims. Records from the coroner’s office show: 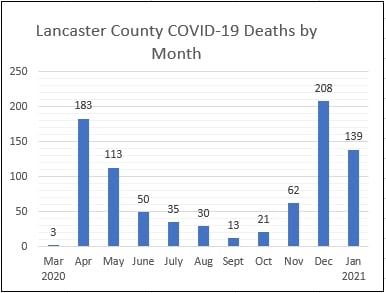 The five highest areas of new cases in January were, not unexpectedly, in the county’s most populous ZIP code areas, according to the state Health Department:

Eight areas had between 100 and 200 cases: Quarryville, Willow Street, Leola, Marietta, Mountville, Millersville, Landisville and Akron. All other areas were below 100 new cases in January.

Three areas were in single digits: Maytown (7), Adamstown (5) and Smoketown (1).

Three towns of much lower population – Terre Hill, Akron and Smoketown – also have seen about 8% of their population infected.

The countywide average is 6.75%, based on state Health Department and Census Bureau records.