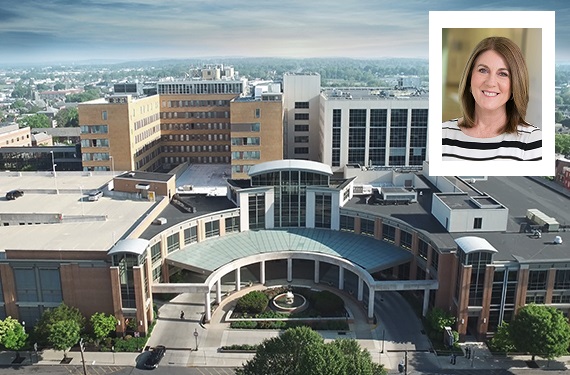 Dr. Todd Wood, chief of cardiology, followed with announcement of a new program to track long-range effects of the virus among recovered patients.

Here is a brief synopsis:

There is an anticipated third wave following the Christmas and New Year holidays. Bergen expects to see the impact of that occur in the second or third week of January, with case numbers rising into February. The hospital has multi-level plans in place to handle increased admissions if that does happen.

“You can have confidence that we are well prepared to manage that,” she said.

“Unlike the spring, the principal challenge that we have today is staffing…,” Bergen added. The hospital is using both temporary and permanent new hires to fill critical support and clinical positions.

Bergen said she is very concerned that only about half of the workforce has been vaccinated.
“The fears that have been articulated among the general population about the vaccine are felt by healthcare workers,” Bergen said. “There is obviously a segment of the population that is just resistant to vaccines” in general.

“We need to continue to educate the workforce about the importance of the vaccine and encourage them to get the vaccine now that it is readily available.”

“Equally concerning,” she said, “is the fact that we are seeing that the minority populations are participating at a lower rate than the general population.”

To make sure all the county’s residents are protected, she said, the hospital needs to identify community leaders who can influence the thinking of the workforce and the general population.

(The Associated Press reported on this issue nationwide Friday.

LGH has reserved 10% of its vaccine allotment for healthcare professionals who not part of a hospital system – independent doctors, dental office workers and other safety net providers. The hospital is compiling a list of those healthcare workers most at risk of exposure and is reaching out to them to come to vaccination centers.

That outreach group includes ambulance medics and other first responders.

Vaccinations for the public

“They would be in that first wave or tier of individuals that we would vaccinate.”

After that, inoculation of the general population will begin.

The hospital hopes all 40-plus of its physician practice sites can be certified by the Department of Health for distribution of the vaccine.

Three offices already have been approved and have started to receive small amounts of the Moderna vaccine.

The hospital is waiting for guidance from the state Health Department and county leaders about plans for vaccination of the general population.

The key question, she said, are: Will large sites for mass vaccination be set up? If so, who will staff them? The national guard, hospitals, or other healthcare organizations?

Because there is a growing body of anecdotal evidence that some recovered COVID-19 patients later develop myocarditis (heart infection), LGH launched a pilot program in December to systematically check for that life-threatening side effect, Dr. Wood said.

Viral infection of the heart can cause an irregular heartbeat that, if untreated, can trigger heart failure and, in some cases, sudden death.

In the new screening program, when recovered patients show up at their next medical appointment – at least two to three months after recovery – their doctors will ask about symptoms of irregular heartbeat and discuss whether they want tests (electrocardiogram, rhythm monitor, ultrasound) that could discover potential heart dysfunction.

A prompt from the hospital’s computerized records system will tell a physician: This is a recovered COVID patient; ask him or her about heart issues, Wood said.

Later this month, the hospital will use its MyLGHealth personal records system to notify those COVID patients about the issue. That will be followed up later by personal letters to recovered patients, suggesting that they discuss the matter with their doctor.

Dr. Wood also discussed the issue of people with serious heart ailments failing to get prompt treatment.
“We’ve seen a huge uptick in patients that have tried to avoid getting better care,” he said.

“People have been delaying and delaying until they were really hitting a tipping point.”

The idea that hospitals are not safe is mistaken, Wood said.

“If any place is safe, it’s our institutions,” he said. “If you delay, you’re not protecting yourself, you’re only hurting yourself.”