Screenshot of the Age-Friendly presentation with moderator, Chris Kennedy. (Source: One United Lancaster) 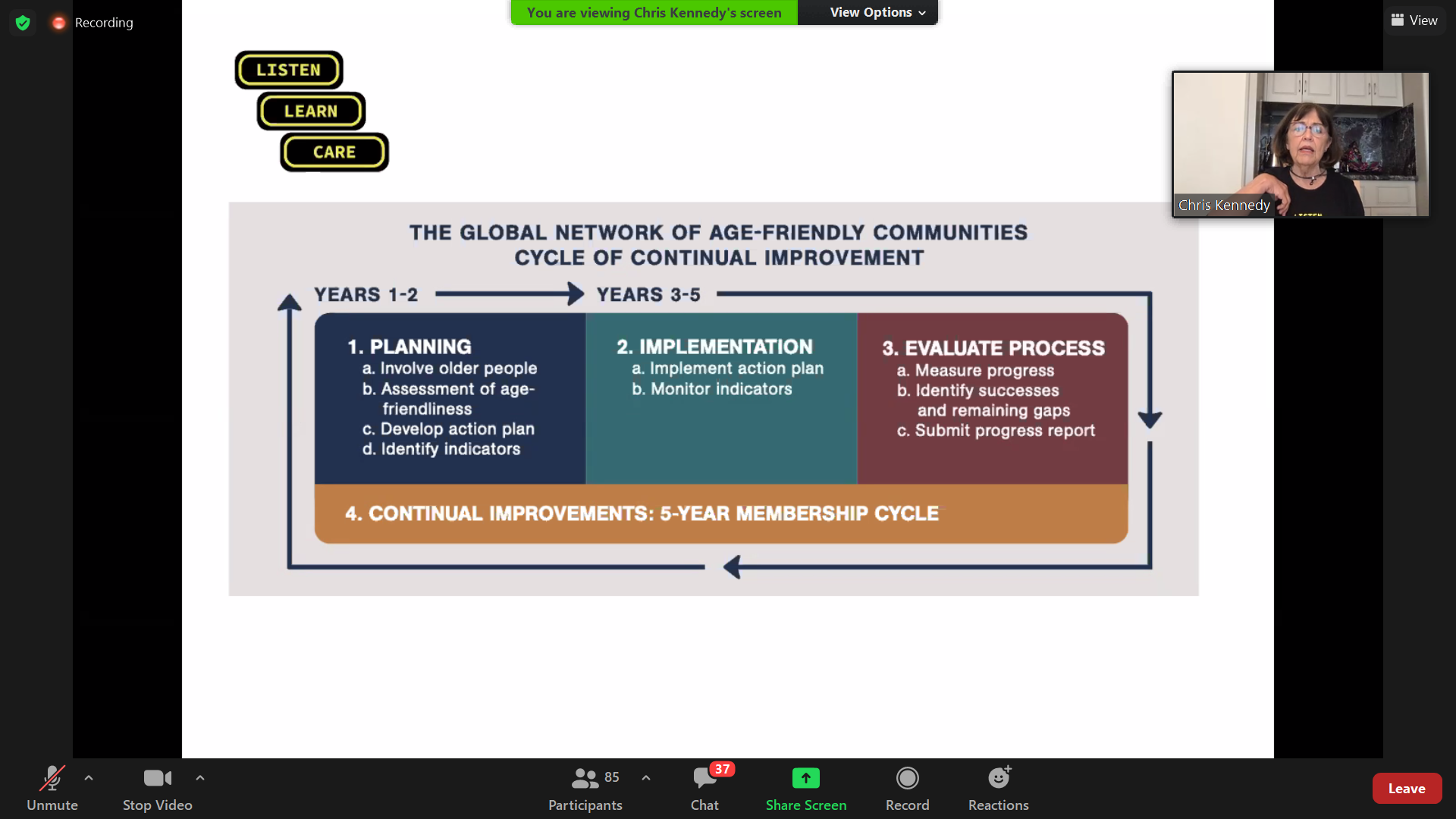 Screenshot of the Age-Friendly presentation with moderator, Chris Kennedy. (Source: One United Lancaster)

The virtual summit brought almost 100 people together to discuss intergenerational Covid-19 projects; as well as housing, access to services and purpose and meaning for Lancaster County’s aging population.

Thirteen breakout groups discussed the topics, with all touching on common themes of struggling with technology, both in and out of Covid-19; as well as the need for resources to facilitate building connections and life-long learning.

A few existing programs related to these themes were suggested by participants, including a virtual senior center at the Office of Aging, the Fortnightly Club at Franklin & Marshall College, and Teeniors a nationwide, intergenerational program that has teens teaching older people how to understand technology.

The virtual summit, entitled “Connecting Generations During Covid: Stories and Opportunities,” included participants from 70 organizations, with more than half over age 50.

The discussion topics were inspired by suggestions from last year’s participants and the Age-Friendly mission of enhancing the lives of older adults and creating a community “where all ages flourish.”

Chris Kennedy from Age2Age Consulting moderated the event. She spoke on two intergenerational projects that have been tackled during the pandemic: ZTutors, and the Racism and the Art of Intergenerational Conversation.

The ZTutor program connects children doing virtual learning with older adults who need to combat isolation. The adults read with the students and give “academic and emotional support,” said Kevin Ressler, the president and CEO of United Way.

The racism project facilitated conversations between three older white people and three youth of color. Each stage of the process saw growth in understanding, Kennedy said, with each group posing questions to each other on the topic of racism, talking in pairs and finally creating collages together that were presented in a virtual art exhibit.

Thoughts from sponsors and Mayor Sorace

Sam Bressi, the president and CEO of the Community Foundation, spoke about the importance of creating a “forever Lancaster” by hearing and emphasizing seniors' voices.

Ressler said the summit, and the work to create an age-friendly Lancaster, is an opportunity for the community to thank those who came before us.

He said the city should be “a place for the dignity of everyone as they age;” an homage to societies that hold their elders in a “place of honor” that isn’t common in American society.

Mayor Danene Sorace highlighted two city initiatives that aligned with creating a more inclusive community. The first was Vision Zero, an initiative to prevent traffic-related deaths through street engineering and improvement of pedestrian options in the city.

She also spoke about the Healthy Homes initiative, which has worked to repair issues like lead paint, mold and pest infestation without displacing families.

“The most affordable place to live is the place you live right now,” she said.

The slogan for this year’s summit, “Listen. Learn. Care,” was inspired by the pandemic and “new knowledge” about systemic racism in America, said Kennedy.

Lancaster County is among more than 1,000 communities worldwide that are part of the World Health Organization’s Global Network for Age-Friendly Cities and Communities.

Network members “listen to the needs of their aging population, assess and monitor their age-friendliness and work collaboratively with older people and across sectors to create age-friendly physical and social environments,” according to the Age-Friendly website.