The Rev. Paul Abernathy speaks to the audience at the “Homes Within Reach” conference at the Hershey Lodge on Thursday, Dec. 8, 2022. (Photo: Tim Stuhldreher) 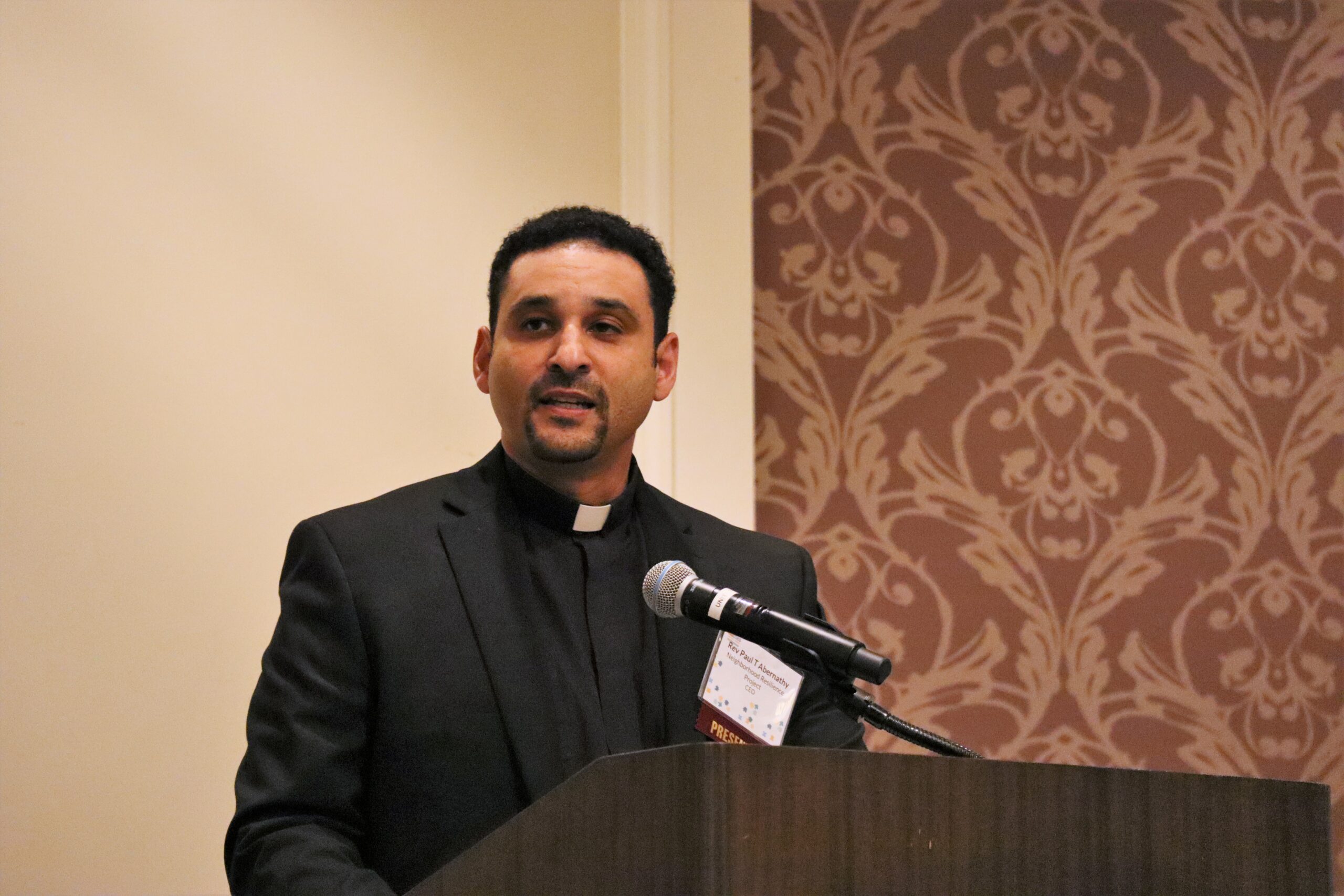 The Rev. Paul Abernathy remembers picking up the phone and hearing the chilling words.

“There has been a murder. … Can you please come and speak to the family?”

Abernathy is an Orthodox Christian pastor and the CEO of the Neighborhood Resilience Project, a Pittsburgh-based nonprofit that employs a trauma-informed community development strategy. He was the featured speaker at Thursday’s lunchtime plenary at “Homes Within Reach,” the Housing Alliance of Pennsylvania’s annual conference.

The murder to which he was summoned, he said, occurred when a woman opened her door to her past boyfriend and abuser, who wanted to collect his belongings. He barged in and began slamming her head against the wall. The man she was living with burst in to defend her. Before the eyes of the other man’s 2-year-old child, he strangled him to death.

Trauma runs deep and its effects persist for generations, Abernathy said. You can provide all the physical and financial investment in the world, but unless you pay attention to people, to their relationships and their deeply held beliefs, it won’t yield the healthy, sustainable community that economic development is supposed to achieve.

“I’ve been on a tour of some of the finest-looking houses in Pittsburgh,” he said, but within those walls were emotional wounds and ongoing conflicts that were “painful beyond words.”

If you wait until a traumatic incident occurs to formulate a response, it’s too late. Nor is it reasonable to expect people to overcome the effects of trauma through individual responsibility and sheer willpower, he said: The trauma that drives negative behaviors is systemic.

The University of Pittsburgh conducted a pilot study of trauma among the population served by Abernathy’s organization. He said it found that 61% had four or more adverse childhood experiences, versus 14% for the U.S. population as a whole (which Abernathy contends is also unacceptably high).

“What happens when trauma is so widespread that it actually becomes the foundation of the community’s worldview?” he asked, adding “Culture is a very powerful force.”

When developers plan an affordable housing project, he said, they need to put the social context front and center. Figure out how to strengthen social networks, not disrupt them. Consider the balance of risk factors and protective factors. Respect the resilience that persists within the hardest-hit communities, and don’t presume to be “a voice for the voiceless,” but let them speak for themselves.

“I hope this compels you to action,” he said. “… I know that change is possible.”

The Housing Alliance of Pennsylvania is a statewide coalition focused on affordable housing. Its Homes Within Reach conference, held this year at the Hershey Lodge from Wednesday through Friday morning, brings together government officials and representatives from a wide range of nonprofits, as well as financial and housing industry professionals, for a mix of presentations, workshops, listening sessions and networking opportunities.

A third of the funding, $125 million, will be used to launch the Whole Home Repairs program. Created by legislation from state Sen. Nikil Saval, D-Philadelphia, it will provide funds for emergency repairs, such as roof replacements, for lower-income households.

That’s an idea with broad bipartisan support, Argall said. Republican and Democratic districts alike have their share of homeowners for whom a helping hand with a modest repair bill could mean the difference between keeping their house and losing it. For municipalities, it could mean the difference between keeping a property livable and occupied and having it deteriorate into a blighted nuisance that has to be torn down at public expense.

Maintaining homeownership allows families to build generational wealth, Harris said, rather than losing their built-up equity to a house-flipper. Beyond that, he said, it’s a matter of dignity and human rights.

“How can a person have dignity who doesn’t have a home?” he asked. “It’s the foundation for everything.”

For Whole Home Repair to earn support for ongoing funding, it will have to be implemented efficiently and effectively at the county level, Argall said. If that doesn’t happen, the skeptics will loudly proclaim it a failure and a boondoggle.

Twardzik introduced a bill authorizing a vacant property registration program, which would give municipalities another tool to fight blight. Opponents objected to the fees it would have assessed on vacant property owners, and it didn’t pass, but it was a good bill, Twardzik said, and he plans to continue pursuing the idea.

Argall said he is hearing more about the issue of affordable housing than ever before. Concerns are coming not just from housing advocates, he said, but from chambers of commerce and from business owners who are struggling to hire because their prospective employees can’t find housing.

Given that level of public interest, he and Harris expressed guarded optimism at the prospect of more housing legislation when lawmakers reconvene in 2023.

When they do, they will be operating in a new political landscape. A new Democratic governor will be in office, Josh Shapiro. Initially, neither party will control the House, but Democrats are expected to enjoy a razor-thin majority in the House, their first in years, once a special election fills the seat of a deceased incumbent. Republicans will control the Senate.

Pennsylvania has funding at the moment, Harris said, and it should be investing it in the community. Democrats will push for money for counties to build affordable housing and remediate blight, he said.

The legislators said they welcome input from their constituents on what problems they see and what solutions they think would help.

“Ideas matter,” Argall said. So does timing: A salient news story can coalesce public opinion on an issue and drive legislative action.

Zappia noted that only a tiny fraction of the thousands of bills introduced every legislative session ever become law.

“To give an issue momentum is an enormous lift,” he said.