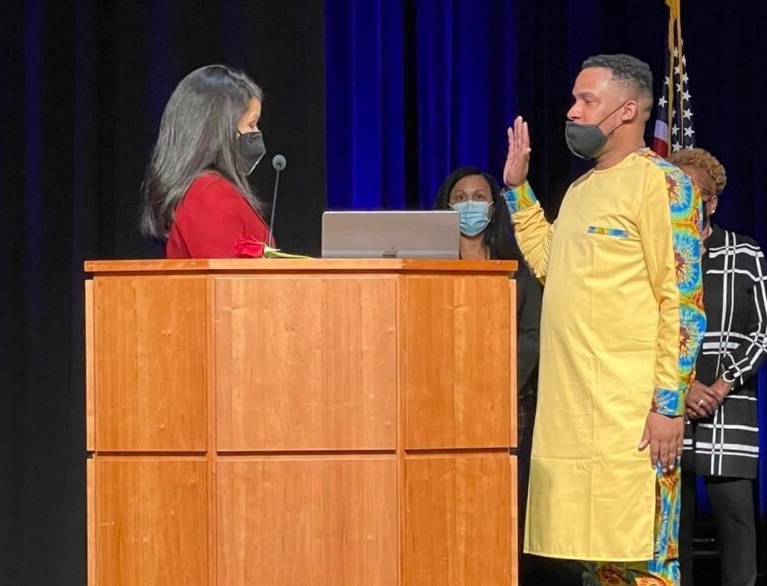 Smith, who was elected as Lancaster city's treasurer in 2021, is a familiar face across the city, especially in Lancaster's southeast quadrant. He is the Assistant Director of Crispus Attucks Community Center and the founder and president of the African American Cultural Alliance of Lancaster.

Smith sat down with One United Lancaster recently to talk about his journey toward self-identity, passion for living in the community you serve and why Lancaster city's southeast needs a park.

One United Lancaster: So, Vincent, what are some quick facts about you?

Vincent Derek Smith: One thing people probably wouldn't guess about me is that I love architecture. I like to walk around looking at buildings, especially in a major city. My friends say that I'm the person who Googles everything. If I see a building, I need to Google it to see when it was founded, who built it and why.

OUL: Tell me more about your role at Crispus Attucks. How long have you been in your current position?

Smith: I've been in this position for about a year, but I've been at Crispus Attucks for 11 years. I started out as a volunteer at the food bank and teaching The Unstoppables, our drill team and drum line. I started as a volunteer and then I became part-time. Then I went part-time to administrative assistant and from there to program coordinator and then to the position that I'm in now.

OUL: Is this the kind of position that you thought you would end up in when you entered the workforce?

Then I got involved with the Boys & Girls Club and I had a drill team [there].

I kind of was always into that community initiative, grassroots movement and my family has always been into that. My aunts were part of the Weed & Seed program back in the day, which was funded by the Community Development Block Grant. They would also host block parties and dance competitions inside the pool when it was drained. So, it's in our blood.

When I got to Crispus Attucks, I realized community is my passion and my grassroots. And then I looked at the history of Crispus Attucks and my Uncle Bumper was on there, because he used to be the executive director. I think this is just one of the things that I picked up from our family tree.

OUL: Besides being involved with Crispus Attucks and the Alliance, what else do you do?

Smith: I'm also a part of Project Activate, which is run by the Community Foundation and gives residents of the southeast a voice.

I live in southeast Lancaster, grew up in southeast Lancaster. I went to what is now Jackson Middle School and still live on Ann Street. I live, work and play in the southeast. I'm one of those people that feels like you can't change the community if you don't live in it. How can I tell you what you need if I don't experience it?

I'm currently city treasurer and I think the first part of that is community grant improvement. Politics play a role in developing communities and if you want to really find your community, you have to figure out where you fit in and how you can make that dramatic change.

I might be city treasurer for the next 18 years, four years, five years or I might leave because that might not be what I want or the direct impact. I'm more of a hands-on guy; I need to physically be there to see the change, but maybe this is how I can make a greater impact. I won't know unless I try.

OUL: What goals do you have within the treasurer position?

Smith: Being more transparent. I don't think a lot of residents know what the city treasurer does and we need to communicate to the community what the role is and how important it is. Is this another way for citizens to get their voices heard and get connected to other resources? My goal is to make it a more visible role and that I'm here to help my community beyond my title.

OUL: You've mentioned a bit about your childhood, like growing up in the southeast. Can you tell me more about your upbringing?

Smith: I have an identical twin brother, a baby brother and some sisters. We grew up in Philly through elementary school, but then came back to Lancaster for middle school because of family issues.

Typical to the African-American community, my grandmother was the provider and foundation. She raised both me and my twin brother, my baby brother, my sister and her kids. Both my grandmother and grandfather were the breadwinners, and because of them I had a mother and a father figure.

After I graduated from McCaskey, I had to find out who I was because I was an identical twin. So I moved back to Philly, found my dad, moved in with him and tried to take care of him. To be honest, that was the first time I think I saw so many African-Americans in high positions, with businesses, and that helped me create my African-American identity.

In Lancaster, I didn't have that. We had some leaders, but [African-American leadership] wasn't as prominent as in Philly, where you could go out during ODUNDE, which is the largest African-American street festival in the nation. So when I got to Philly, it was like total culture shock.

When I came back to Lancaster, my first duty was to volunteer to restart the drill team. Then I was thinking, "We have a Latino Festival, but we don't have an African-American one. Let me get a group together and see if this is something we can make happen." So we met in the basement of Ray's Temple in 2004 or 2005 and it was called Lancaster African-American Festival. I swore it was going to take off and it didn't.

OUL: Why do you think it didn't work out?

Smith: At that time, I wasn't ready to admit to myself that I was Black and I was proud. I'm trying to organize this festival of African-American culture, but I was still dealing with my own identity without trying to offend other people.

Under Crispus Attucks, we created the Infamous Unstoppables Annual Event, which was basically the same thing.

Also, before urban renewal came in, the southeast was a cultural hub for the African-American community, with Crispus Attucks and the Black Elks and other gathering places. But when urban renewal came along, a lot of those things didn't survive, including the cultural pride, so my goal is to bring that back and reignite the fire that we're still here.

OUL: So how does that connect with the current African American Cultural Festival?

Smith: This is our eighth year doing the parade and festival. After separating the festival committee from the Crispus Attucks and CAP merger, that's when I was ready to say I'm OK with calling it the African American Cultural Festival and getting that backlash, because I'm mature enough to understand that I didn't have to hide and that people would support it because they believe in the vision.

That's kind of how the Alliance was built, too, because we had to figure out a way to promote African American culture and events without being sorry. Being a nonprofit created too many lines, so we developed that we are a grassroots community organization that's just coming together to promote African American culture, and if we get funding, great; if we don't we're still going to do it anyway.

We've had the festival in the southeast, but we had to move it to Reservoir Park due to some construction. That's my next fight; the equity of park space in the southeast.

OUL: Say more about that.

Smith: The southwest has Culliton Park, the northeast has Reservoir and the northwest has Buchanan, but the southeast? None. We don't have one. The only basketball court in the southeast is on school district property, which is private. Yes, Reservoir is right there, but because of the boundary that was created, the southeast can't claim that.

That's why I always wanted to create an event that our community members could walk to and not have to drive or catch a bus. That's why it's so important that the festival stays in our neighborhood; so that people can walk there.

My vision is to at least get us some space in the southeast that we could call a park. Not a playground, a park. Because we have multiple playgrounds, but there's no green space where you could throw a football.

OUL: As we think about Black History Month, are there any events you want to share about?

Smith: [Crispus Attucks] is partnering with the YWCA to do a Black History Quiz Bowl, "Are You Smarter Than A Fifth Grader: Black History Edition," for both youth and adults. We also launched a "Taste of Africa" cooking class, which started January 31, every Monday in February and teaches you how to make certain African dishes a healthy way.

We're doing "Soul Food Sundays," which highlights local Brown and Black leaders and pastors who have contributed to bettering the Black community. We have a couple other things planned too to replace our usual step show and gospel choir night since those usually draw a lot of people and we're trying to be safe with Covid.

OUL: Are there any other upcoming projects from any of your organizations?

Smith: Crispus Attucks is in the process of launching a youth employment program called Clean Streets where youth will walk the streets, clean the streets and provide information and resources in the southeast. We're going to launch that as a five-week pilot and they'll get paid to do that but also get a financial workshop and a leadership class so that at the end of the five weeks, they can walk away saying, "I got a paycheck, but I got knowledge too."

OUL: Do you know when the first program is anticipated to start?

Smith: We're actually in the process of doing the background checks, but we'll start with five youth for the first five weeks and then do a second five weeks with another group of five. The goal is to have that started by mid-February, or at least March. We're going to see if this is something the community supports and will benefit them, but we don't know until we try.

OUL: I've heard you referred to as the "hardest working man in Lancaster." What do you think about that?

Smith: We all have flaws, right, and one of my biggest ones is not knowing how to slow down. I feel like there is always something to be done and even when people say, "You've done a great job," my mind is already on the next event. I have to figure out, like Izzy [City Council President Ismail Smith-Wade-El] says, how to celebrate the small victories. I feel like there's a long road ahead before we can say that we've accomplished something.