Members of the Lancaster Cricket Club pose in an undated photo. (Source: Provided) 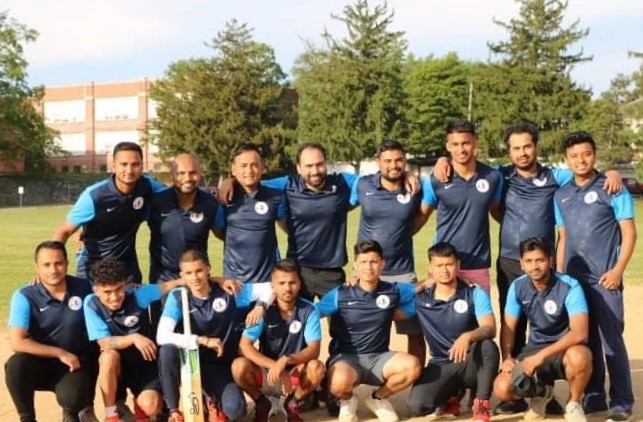 Members of the Lancaster Cricket Club pose in an undated photo. (Source: Provided)

The Lancaster Cricket Club — a group of former refugees and cricket enthusiasts — will officially open Lancaster’s first cricket pitch with an inaugural match this weekend.

The match will take place beginning at 9 a.m. Saturday, Sept. 25, at the cricket pitch, located at the Franklin & Marshall College practice fields at the corner of Lincoln and North Water streets.

The game will feature mixed teams of cricket veterans and some local “celebrities” (police officers, firefighters, elected officials, nonprofit leaders) playing a truncated version of the game, which can sometimes take days to complete.

It will be preceded by a ceremony in which local leaders from the Hindu community will bless the field.

Attendance is free and open to the public. Nepali food will be available for purchase.

The organizers of the Cricket Club say the pitch will fill a huge need for the many cricket players who have come to Lancaster from all over the world.

Young people have been playing cricket on baseball and soccer fields in and around the city of Lancaster. But without a field of their own, “the sport could never truly take off,” said Dilli Subedi, a leader with the Cricket Club and the Bhutanese Refugee group BRIGHT (Bhutanese Refugees Inspiring Growth, Humanity & Tradition).

Subedi and his band of cricketeers reached out to community leaders for help. One immediate ally was Melanie Martinez, Principal at Wharton Elementary. She saw kids playing the game on makeshift fields with tennis balls and wondered why there wasn’t a designated spot for cricket.

Martinez, who passes the F&M fields on her daily walk to work, thought it was the perfect place for a pitch.

After encouraging conversations with the Lancaster Rec Center and F&M's facilities management department, the group had themselves a location.

“It all moved so quickly,” Subedi said. “We were overwhelmed with the support.”

The club is continuing to raise funds to make up the approximately $8,000 it cost to convert the field into a cricket pitch. It has set up a GoFundMe site for donations.

F&M President Barbara Altman said she’s excited to partner with the Cricket Club and that the pitch is a symbol of the welcoming spirit of the college and the area.

“The opportunity to showcase a game popular with millions around world is a boon to the College as well as the City of Lancaster,” Altman said.

Cricket is played by an estimated 220 million people worldwide and watched by about 2.5 billion, making it second only to soccer in worldwide fandom. The game is especially popular in Great Britain and its former colonies in South Asia (India, Pakistan, Nepal, Bangladesh, Afghanistan), Australia and New Zealand, and the Caribbean.

“One main goal of the pitch,” Subedi said, “is to bring together the many cultures who play cricket in the area and create a community around the love the sport.”

But Subedi and his fellow organizers don’t just want to preach to the choir. They want to bring the game to a much wider audience.

“We want to host clinics to teach newcomers the sport and create a real interest in the game from people who may have never heard of it” said Basu Timsina, one of the co-founders of the club.

Raj Singh, a native of India who moved to Lancaster recently, said this is a great opportunity to set down roots in the area. While he enjoys playing the sport, for him the cricket club represents “a great group of friends and a family away from home.”