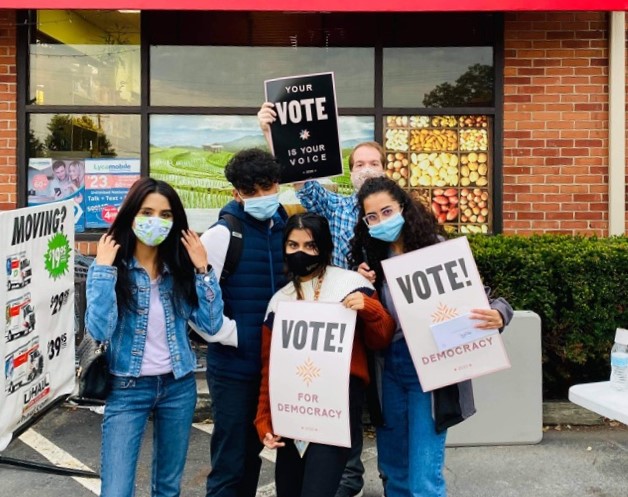 If you know me, even just a little bit, you know I’m a total nerd about politics. While I love playing amateur pundit, discussing the political horserace is just a surface level expression of my unerring belief that, despite its flaws, American democracy is still worth all the trouble.

The last four years have tested the limits of that optimism.

Maybe it’s the deep polarization. The lack of shared facts necessary for informed discourse: “the marketplace of ideas” seeming more like a constant barrage of partisan spam.

Or maybe it’s at a more personal level: the chilly silences at Thanksgiving dinner, where issues that used to be nonpartisan are suddenly infused with the same zero-sum logic as an NFL game.

Whatever the reason, I’m lucky enough to have a job that allows me to find consistent hope in the American experiment. Because I work for Church World Service Refugee Resettlement, I don’t have to look much farther than those folks who were born without any expectation that their voices might ever matter.

I’m thinking specifically of the roughly two dozen former refugee youths who have formed the core of a small civic engagement army that created significant and lasting civic interest in their communities, all while restoring my faith in participatory democracy.

Most refugees resettled in Lancaster come from countries that don’t have democracies; or, if they do, are DINO countries: Democracies In Name Only. (As a former Iraqi refugee likes to remind me, Saddam Hussein was voted into office with 99% of the vote for 30 years running.)

Most refugees come from places where, even if democratic governance existed, their gender, religion, tribal allegiance, skin color, or culture rendered them non-citizens and precluded them from enjoying whatever rights are available to those in the “right” demographic.

So, seeing youth engaged in the process that so many of my fellow citizens have taken for granted never gets old.

Most groups waited outside of Nepali-speaking grocery stores to register voters. I was in the Covid-safe phone-banking room, contacting Bhutanese voters across the state with four of the most inspiring youth I know.

The young man on my left, with the perfect customer service voice, was deep into conversation, in Nepali, with a family of six who had moved to Pennsylvania six months ago and hadn’t registered to vote yet. He walked them through that process and brought a whole family into the fold.

The young woman at the end of the table was detailing in-person vs mail-in voting options and explaining the pros and cons of both. The young woman closest to me was on the receiving end of an unruly and annoyed voter giving her a piece of his mind for interrupting his Saturday rest. The good, the bad, and the ugly of politics.

As they beamed with pride, or fumed with anger, I found myself sighing contentedly and repeating the most quotable quote of Lancaster’s one and only commander-in-chief (James Buchanan, a man with whom I share almost no other values): “I like the noise of democracy.”

All in all, the young former refugee registered nearly 400 new voters. By election day they will have made 1,000 phone calls. They have made instructional videos for navigating the often (too) difficult process of voting in the US. They have become the repositories of information for their community, not supporting any specific candidate, but achieving the larger goal of creating a community that values voting and which demands to be heard by whoever is in office.

In many ways this has transformed social relationships: the “kids” were becoming leaders and showing their parents and grandparents that they were making good as new citizens of the US.

Alone, this would be inspiring, but I’m blown away when I remember where these young people are in their lives. These are mostly college students — with some healthcare workers and entrepreneurs as well — during what must be the craziest semester of their lives, devoting precious weekend time, during a pandemic, to make these calls.

As I drove home from Harrisburg, my feelings of hope bordered on the apologetically sappy. As I passed the familiar fields around Route 283, and saw the Griest Building suddenly breach the horizon, I realized why.

This went beyond the election. I was watching, in real time, the development of the young people who will lead our community in the years to come. I’m watching them find their voice. I’m watching them navigate the complexities of two cultures, and gleaning from that process a unique perspective that makes them an invaluable asset to the Lancaster of the not so distant future.

And just when I feel like I’m putting them out — "crimping their style," to use a phrase from my youth — arrived home with my phone full of texts: “When can I do more phone banking? How can I help educate more voters?”

I don’t think I’m alone in being drained by this year’s election. All of us could use a little uplift in the civic pride department. I might suggest talking a look at the pictures of these young people, most of whom are first-time voters, who might never had imagined exercising civil rights. I know it’s kept me afloat.

Seeing our democracy through the eyes of these young former refugee youths is like being a tourist in your own country and rediscovering things you’ve long taken for granted. It’s seeing with fresh eyes the beauty, the messiness and the meaning of democracy in action.

I don’t believe American Exceptionalism is guaranteed. It can be expanded or corrupted; it waxes and wanes. We are at our best as a nation when we realize the highest hopes of a more perfect union are far more important than some former greatness.

The former refugee youth that I have worked with over the past year have been the light that has renewed my faith in that exceptionalism. The foresight and greatness to welcome newcomers who crave freedom to share in the experiment of democracy is a truly exceptional thing. And the return on investment, to use a crass commercial term is almost immediate and enduring: former refugees work so hard to contribute to the country they see as the great hope for themselves and the world.

I don’t know what I would have done without them.

Matt Johnson is a refugee community organizer at Church World Service in Lancaster.