Community and faith leaders join hands for a prayer during protests at the corner of North Prince and West Chestnut streets in Lancaster on Sunday, May 31, 2020. Kneeling at right is Mayor Danene Sorace. (Photo: Todd Gusler) 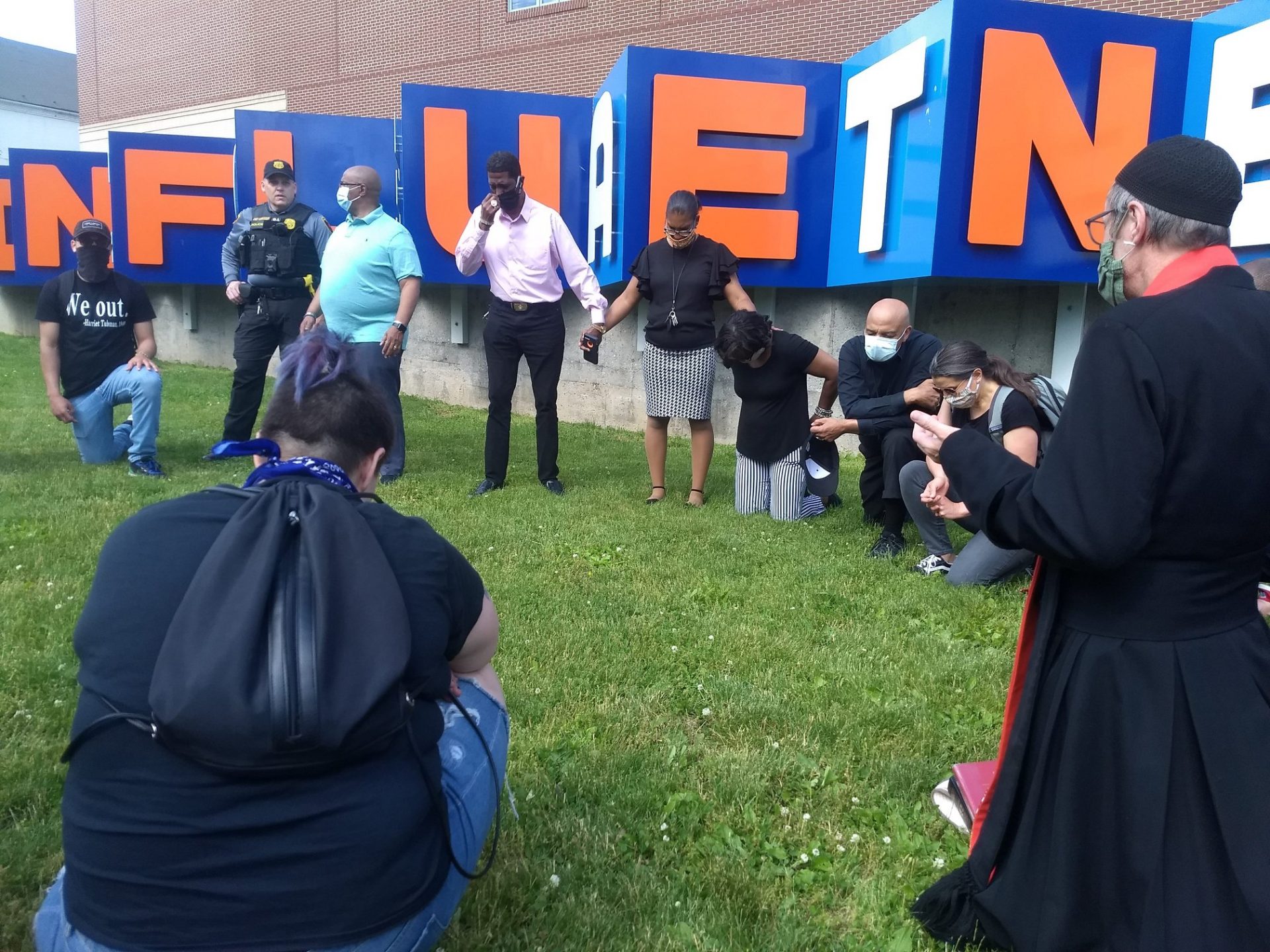 Sunday at 2:00 there was a car rally to respond to the murder of George Floyd in Minneapolis. Instructions were to drive in your cars along a designated route of a few blocks around downtown Lancaster, including past the police station. I rode my bike so I could observe things and move easier as I expected their to be gridlock and slow moving traffic. Many cars were out with signs and writing on their windows asking for justice and standing in solidarity with the African American community. Most of the drivers were white. At the corner of Orange and Mulberry I ran into a friend holding a sign. I talked to her for a few minutes and then continued up Mulberry before turning right onto Chestnut. Cars were not moving but people were holding their fists up and beeping their horns. The atmosphere was serious but joyful and hopeful.

It all changed at the corner of Chestnut and Prince. I’m writing only what I saw, as imperfect and incomplete as it is. All sides of the intersection were full of people and it was a much more diverse crowd. Police stood in the middle of the intersection. Protesters stood across Chestnut; traffic was being diverted onto Prince and this was causing a bottleneck. Among the protesters standing in the road were individuals taunting and yelling at the police. The police stood silently in a circle. I eventually moved to the corner of Chestnut and Prince where there is a small grassy area. The “Create Influence” sign is behind the grassy area. Immediately I noticed two young white men dressed in all black at one of the picnic tables. One was wearing boxing gloves, not the thick kind you would use in a ring but padded fighting gloves of some sort. He was wearing a backwards Oakland A’s cap. I watched the pair warily as they picked up their packs and stuffed several water bottles into them. The crossed the street and stood by the Auntie Anne’s sign.

I noticed a huddle of police officers in riot gear on Prince Street turn and march towards the intersection. I began to feel nervous of what I was seeing. Yelling and chants continued from the crowd. I glanced over at the Auntie Anne’s sign and saw the pair still there. A few moments later I noticed a clergy colleague of mind and began to walk over to him when a commotion began. Just as I approached him to say hello water bottles flew in the air, the crowed yelled, and I saw someone being tackled by police. Tear gas or mace or something was shot out and the crowd began to run. I moved back up Chestnut street and watched from a distance as whatever was happening continued.

My colleague left and I saw a young woman sitting on some steps across from the police station. Her eyes were red and someone had stopped to give her some water to help dilute whatever substance had been sprayed in her eyes. The police arrested some individuals while yelling and taunts towards them continued. I walked over to the woman gave her my water to help flush her eyes. White puddles of something were at her feet as she poured water over herself. When I asked what happened, she said she was in the crowd, the police attacked a woman, and she got pepper-sprayed or whatever. Again, this is a summary of what she told me.

I went back down to the corner where the crowd had swelled again. More police were arriving. I left and rode my bike around the route that had been planned. Traffic was at a standstill but people were waving their signs, holding their fists, and beeping their horns. The mood changed back to joyful and hopeful. I spoke to my friend again and told her what happened. She replied that there were concerns that a group of agitators from York were coming. She said her group (Lancaster Stands Up) was trying to deescalate things. I then rode back to the corner of Prince and Chestnut, keeping my distance from the crowd. Police cars from outside the city had joined the city’s contingent along with the State Police. Most were dressed in riot gear. Police kept coming and cycling through and the crowd continued to get angry.

The crowd was diverse. People of color stood next to young white people dressed in black. The crowd definitely leaned towards a younger set. Some self-identified medics were helping those still suffering from the teargas or whatever it was. A group of 15 or so Orthodox or Hasidic Jews mingled with the crowds. I asked one if they were local; they had come from Philly. I didn’t find a reason why they were there, but they seemed to just be taking it all in.

As I retreated to the back area of the grassy area, I noticed Jess King, who is on the mayor's staff. I told her what I saw with the men dressed in black earlier and she confirmed that there were groups of agitators present. I observed her and City Council-member Ismail Smith Wade-El ask a ranking police officer to get the police to pull back. Perhaps if the police pulled back the crowd would deescalate. The police officer said he’d try. More police in riot gear came. Mayor Danene Sorace rode up on her bicycle and she and the others updated each other.

The crowd eventually moved down Chestnut in front of the police station chanting. I couldn’t make out exactly what. Police still stood in the intersection with a small crowd continuing around them. Councilman Wade-El stood on the brick facade of the police station and began speaking to the crowd. The intensity began to die down. He asked for all gathered to take a knee and join in. He then invited an African-American clergy member to speak to the crowd.

I noticed a white clergy member wearing a stole and introduced myself. We made connections and then another clergy I knew arrived. The local NAACP had put out a call for clergy to come and help deescalate the tension. I continued to meander around unsure of what to do. The crowd in front of the police station decided to move to Penn Square and protest there. As I checked in with the clergy member I knew, a larger group of clergy dressed in their clergy outfits moved in. I was wearing athletic shorts, a t-shirt, my mask, sunglasses, and a bike helmet. A leader of the clergy group signaled for others to join them, so I did. There the mayor stood and asked us to kneel and pray. The police chief joined the group. While we prayed, the police in the intersection dispersed. The prayer ended and clergy were invited to discuss with the mayor about how to continue to deescalate things with the crowd moving to Penn Square. I felt it was time for me to leave.

Sunday was Pentecost; I preached about how at Pentecost God’s Spirit calls the church to go outside and engage with the world. I am still processing what I saw and my engagement with it. I don’t know if it was wise for me to be present, especially with the threat of COVID-19 out there and the anger I saw from some of those gathered. I don’t know if I have any answers or conclusions to what I saw. But I’m glad it ended with the hope of a circle of prayer. Kryie Elison!