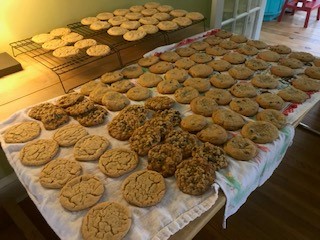 I, like the rest of you, have probably noticed this peculiar trending phenomenon related to one of my favorite things: comfort food. In particular, baked goods. For whatever reason, since social distancing orders began, there has been a stunning uptick in this activity. Cookies, cakes, pies, bread—ahhh, the bread! Sure, there is a population to whom this is nothing new, but I’ve lost count of how many of my friends, who’ve never baked anything in their lives, have suddenly pounced on the chance to try it. And with no lack of ambition, they’ve been posting goals and photos of the process, both in success and failure. But let’s face it: rarely is a baked good a failure (see ‘inedible’), unless burnt to a crisp, or too much salt got involved. I’m no novice at baking, but even I have had one case of each between a successful devil’s food cake, and something of a failed pistachio cake. Seeing as how I sacrificed 5 eggs into the latter: waste not, want not, and let me eat cake.

So why have people chosen to spend so much of this solitary and introspective time in cahoots with their ovens? I mean, besides the fact that baked goods just taste so marvelous, and it’s especially hard to escape the increasingly loud call of carb-heavy choices that seem to bounce off of the walls we’ve become so familiar with. My theory is that the consumption of this type of food has very little to do with it at all, but instead hits on two psychological reasons.

One: for many, moments of defined accomplishment have been difficult to achieve as of late. And for some of us, seemingly impossible, and we don’t like that very much. When we’ve accomplished something, it means we’ve had some control in it getting to that point, and I think there’s some agreement that it feels pretty good to have been along for the entire ride. Baking is no different, as there are stages for preparation, creation, an outcome, and (hopefully) enjoyment of the results.

Two: Have you ever held a baby and found yourself gently swaying back and forth? You may not have even meant to do it, yet you end up doing it anyway. Why? Well, because it’s soothing. Much of the same can be said for certain aspects of baking, and whether we realize it or not, the repetitive, circular motion of stirring batter, and the back and forth rocking of kneading dough are relaxing. Don’t we often refer to cats kneading prior to napping as making biscuits? That’s because it’s comforting to them, and we should probably trust their little alien brains when it comes to things like this.

I’ve no doubt that there are more reasons why our grocery store flour and sugar shelves have been a bit sparse—if not completely bare—and I was thrilled to recently learn of yet another one.

If you know any high school seniors—or are one yourself—you understand what a letdown it has been for these students to learn that they’ll be missing out, at the very least, on graduation and prom because social distancing as we await COVID-19’s departure is crucial. While there are a plethora of understandable reactions to this, a McCaskey senior by the name of Amani Kauffman has chosen to make the best of a rather disheartening situation—by baking! But for her, it’s been about more than just the process of whipping up a batch of dough and consuming the results.

When I asked Amani how baking fit into her life, she shared with me that, with all that has been going on and how her usual activities have come to a halt, sleeping has been difficult, thus resulting in 1 a.m. cookie-baking sessions. And not just chocolate chip or peanut butter, but a slew of others that she came across while searching for recipes on the internet: “I was making so many different kinds, but I made sure the cookie recipes I was using were for SOFT cookies (as that’s a personal favorite of mine).”

But habits like this can also turn out an overabundance when done so frequently, and Amani and her family soon found that they couldn’t keep up with the consumption of baked goods in their home. So, what to do with the extras? Ah, to be one of Amani’s friends in such a time! And that is exactly what she did: passed them along to friends. Just as one might predict, however, with batch after batch of at least ten different types of cookies (including vegan and gluten free), and positive response from family, friends—not to mention exposure of this venture to Amani’s approximately 500 connections on Instagram—the requests for orders made a rapid climb.

“Once I started to get lots of orders, I decided to ask for donations so something good could come out of my baking.”

What started as a simple way to help her get through her own struggles, also became a way for Amani to help others in our community. In just a short time, she raised $489 in donations—all of which went to LancoCares, an emergency fund that has already helped so many who have been financially impacted by COVID-19—and the order requests have yet to stop.

“I would like to add that without making these cookies 24/7 I’m not sure where I would be!” Amani confessed. “It’s been difficult coping with the loss of my senior year but making baked goods has helped me feel productive and made me realize I can still help my community in the middle of a pandemic.”

Many cultures are known for bringing people together with food. Even though we are less together than we would like to be right now, it’s a beautiful thing to know that there are still ways that we can accomplish this, and like Amani’s approach, how sweet that is!

Heather E. Hutsell began writing stories at age eleven. Her first—a murder mystery—won her an award through the Young Authors program, as did two more detective mysteries in as many years. Already set on becoming an author, she published her first novella, Awakening Alice—a sequel to Lewis Carroll’s Alice in Wonderland—in the collaborative work Ghost on the Highway, in 2006. She went on to self-publish an illustrated version of Awakening Alice along with its sequel, A Ticket for Patience in 2007. Heather has since written and self-published eleven more novels, two novellas, and four short story collections. Her works include romantic horror, absurdist fiction, dystopian tales, dark comedy, and a Steampunk mystery series. She has also written two historical documentary series for Lionheart Filmworks. Her blog and more information about her work can be found at www.heatherehutsell.com.